Version and Serve Your Data with Hasura

Have you ever lost critical data due to overwrite? Such a silly question… of course you have. This is the nasty side effect of the U in CRUD. It is not even a design flaw since an update operation is meant to replace you existing data. Hence, it is a very valid common use case.

Most common attempts to mitigate said problem might be limiting. A naive but brave suggestion suggests not to allow access to the DB. 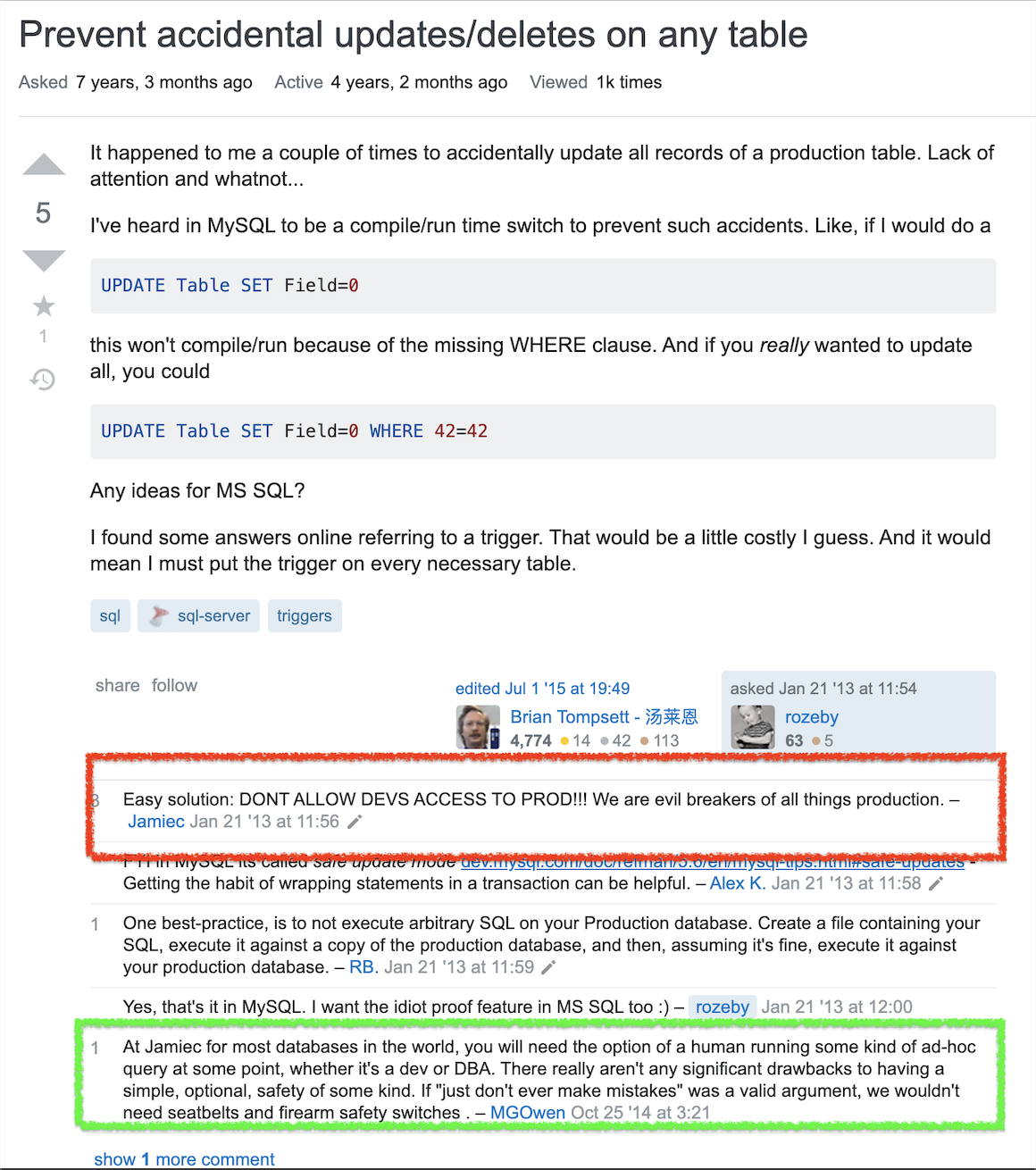 You read it right, it is easy peasy, just don't do it!. It is not a super bad advice. Infact, you probably received such advice as well. It might be useful for some, very limited, use cases. Anyways, let our hero, MGOwen speak for all of us: If "just don't ever make mistakes" was a valid argument, we wouldn't need seatbelts and firearm safety switches.

What if preventing update is not an option? Let’s think even more extreme and embrace updating sensitive data everywhere including in production. Imagine that your system requires applications to perform an update but still need to keep track of every goddamn change ever happened to data.

Welcome to my world, ladies, gentlemen and other gender members. I spent most of my career dealing with fintechs and finance companies in general. There is one capability you must have as a financial service provider. Every action must be logged alongside with corresponding data. Otherwise, you are liable for any financial crime occuring at your platform. This is the way of fintech life, you have to suck it up.

“Versioning data? So what? It is not rocket science”, I hear you say and you are right. I mean, let me be honest, I have found many different ways to mitigate this problem in the past. There are myriad of ways to implement a platform with a versioned data model. That is not the point. The cost (both time and money) that such implementations often come attached with give start-ups a big smack in the face especially when they have to be agile. You see your friends enjoying building shiny new APIs backed by simple CRUD systems and start their start-up journey months ahead while you fight with tons of quirky data models to offer a brand new finance app to the world while regulators are stalking you.

Hasura is a perfect tool to add API on top of such data models with ease.

I will be way quicker with this one. I want to, very quickly, show you that what I am capable of doing with this bad boy. You can do way more than what I promised in the begining of the post but I’m keeping it simple. We are going to build a GraphQL API that:

Run these commands and go to http://localhost:8080 in your browser.

Have questions? Not my problem. I’m here to tell my story. For Installation related questions follow this link

Here are features of this table that is crucial to me(regardless of actual content):

A data (jsonb) field is added to represent the versioned content. There is no limit(except DB column limit) for how many columns you can add to the table. We don’t care. All of these fields will be versioned.

Here is a gif for you. Hasura Console is enough to create this table without any direct access to our beloved DB.

This part is the most tricky part of all. We need to create a SQL View to represent the most current version of the example record sharing the same id value. Additionally, we need to access the created_at value of our very first version of a example record with the same id. If the most recent record has deleted with true as value, then we need to hide it so it doesnt appear in this layer.

Bear with me and take a look at this ugly query.

Let’s break this down:

Don’t forget to add it to Hasura:

As I promised, our approach will let you see all historical versions along side with current version. We will connect versioned.example table with public.example view on id column. As each example record potentially has many versions, we need one to many, aka array, relationship. Hasura Relationships comes to our resque:

Now we are able to reference each version of our record alongside with most recent one.

STEP 4 - This is not the step you are looking for.

No more steps. We are done and let’s enjoy our new API. Here is a glimpse of joyful use of real-time versioned API we have just created without wasted sprints by a team of engineers. I’m going to add/update/delete/undelete an example record using Hasura GraphiQL UI. In the meantime, all of my actions will be tracked in real-time using a GraphQL subscription query.

Let’s have a look at our query:

Consider Hasura as a SQL generator engine for your GraphQL API. It is a very powerful single layer for your application. Investigating generated SQL queries for given operation is mostly enough to understand what is happening under the hood. This transparency is very rare to find for a product that provides such capabilities. However, for high stake tasks, such as finance, utilizing a very trivial use of actions to control and enhance your API layer can be crucial.

With this approach, you are only inserting new records to your DB. We must take away any UPDATE, DELETE, TRUNCATE privilages from the operating DB user. In addition to that, Hasura must limit the access to corresponding mutations using various techniques such as Whitelisting, Authorization & Access Control. I haven’t touched such aspects within the scope of this tutorial. However, they are very powerful and useful abstraction mechanisms.

PS: if you are a TLDR kind of person, you can check out my repo and replicate this tutorial easily. First execute the contents of db_schema_dump.sql and load the metadata using hasura_metadata.json